When we Firthsisters heard that there was to be a premiere of LA in Munich we really hoped that ODB would attend. And some rumours gave us hope. It was even in the news! So we started on our "holy quest" to meet our star....... 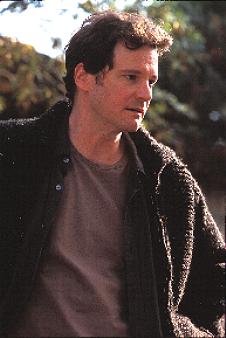 1. Press conference at 3.00 p.m at the Künstlerhaus at Lenbachplatz

Everything was top secret! So just by chance Emiliana from CFFW got the information that the press conference was actually going to take place to that time and place .......... about 45 minutes before it was due to start.

She called me on my mobile and we miracously arrived both around 2.30 p.m., just in time. We were just about 15 people waiting for the actors. Em and I were waiting for ODB, another girl was waiting for Alan Rickman.
We were all to be disappointed.......
But anyway, we were there to take every chance we could get. When the actors came everthing passed very quickly. We were able to snatch some autographs and some pics and it was over.......
We saw: Richard Curtis, Laura Linney, Bill Nighy, Rodrigo Santoro and Hugh Grant.
Hugh looked really tired (maybe jet-lagged.... or just hungover, who knows for sure...) and gave me an absolute unrecognizable autograph.... Well, at least I got one.

Here are my pics:

2. Picking up the other girls

After that we went to the main station to pick up the girls who were due to arrive soon from Ulm at 4 p.m.
But not before we were informing our fellow Firthsister about the absence of ODB with a posting in our Colin Firth Fantasy Women-Group at msn.com (CFFW).
When we finally met the girls (one from the German Colin Firth Yahoo Group and two Alan Rickman-Fans) we had to inform them also that our wishes were not likely to be fulfilled....... Big disappointment!

Em went home to get some stuff until the LA-party which should start around 9.30 p.m. We arranged to meet then at the Mathäser theater (cinema) at 8.00 p.m.
I took the girls for a coffee to the cinema to show them the location. There we discovered that there would be a big show for the premiere with a very long red carpet, lots of tv- and radio-stations.
We asked a security girl when the actors were due and got the information that they would arrive approx. at 7.45 p.m.
So we got some coffee and a place to sit not toooooo far away and called Em to tell her the news.

3. Premiere at the cinema
Finally at around 6 p.m. the first guests started to arrive....
I really wonder how they got their tickets for this event! They were just plain people, even families with small children!!!
Rumours began that some more actors should arrive for this event, so we felt a little hope arising that maybe ODB would actually be attending now. But we didn't really dare to hope in earnest......

From approx. 6.45 p. m. local actors and celebrities came.
I got some nice pics of them, too.


Shortly before 8.00 p. m. the actors came. But before you hope too much: ODB didn't show up.
Well, we got some more nice pics and even some autographs from Bill Nighy, Rodrigo Santoro and Hugh Grant.
Heike Makatsch didn't give any autographs and was just talking to the press not giving us any attention.
Laura Linney gave some autographs but was very soon fed up with it and went on. 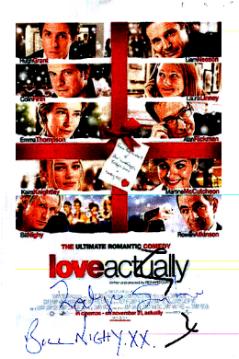 And these are my autographs: You can easily recognize Rodrigo Santoro and Bill Nighy. Hugh's "signature" are those black signs like Babylonian cuneiform.... going from the right corner of the end of the sheet up into the LA-logo.....

And I just got Emiliana's pics for your enjoyment!

With her permission I add them here: